Didn’t get a chance to watch any movie in last couple of days. Finally last night I managed to watch “Pi” (no!! not pee :p).

“9:13, Personal note: When I was a little kid my mother told me not to stare into the sun. So once when I was six, I did. The doctors didn’t know if my eyes would ever heal. I was terrified, alone in that darkness. Slowly daylight crept in through the bandages, and I could see, but something else had changed inside of me. That day I had my first headache.” 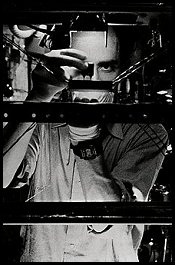 Max, the main character of “Pi” is a young genius mathematician who works with number theory and believes mathematics is the language of nature. He believes there is a certain pattern behind every single thing in this world and has built a computer to find that pattern. Throughout the movie he tries to find a string of 216 numbers which explains that pattern. Somehow this string of numbers is related with Pi (3.14) [ i don’t know how, didn’t pay that much attention :p]. So as an experiment, Max tries to find a system to predict the behavior of stock market. Wall Street people find about it and chase him to capture that number. Also, a young orthodox Jew (member of a group of Jew people who think the Tawrat, holy book of Jew religion has a secret message hidden inside it which can be obtained by getting that 216 numbers code) tries to convince Max to give him the number.

Max also has this severe migraine pain since childhood and at the end Max makes a hole in his head with a drill machine to get over with his pain. :p He almost kills himself and ends up in a white peaceful place; finally he smiles for the first time in the movie. He looks around himself and doesn’t see a pattern anymore and finds happiness at last.

Is this movie about mathematics (which I thought at first)? No, I don’t think so. There is nothing about mathematics in this movie except few contour maps, meaningless graphs and random numbers. Is it about headache then? Probably “yes”, because after finishing this movie I felt dizzy and got a headache form its unpleasant camera works and wired camera angles. :p This movie is in black and white (which I don’t mind) with annoying screen flickering.

Anyhow, overall “pi” is an average movie. Nothing extra-ordinary about it.

There is another movie from the same director: “Requiem for a Dream”. I think I am going to watch that one next. 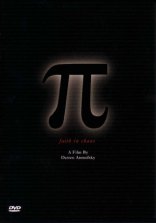 This entry was posted on Saturday, June 9th, 2007 at 10:16 am and is filed under Movie Review. You can follow any responses to this entry through the RSS 2.0 feed. You can leave a response, or trackback from your own site.